Bruna Abdullah, who is famous for her role in the gangster Tamil movie Billa 2 often generates more like for her pic in the Instagram. She recently posted her nude topless photo in the social media and showed her strong presence.

In this situation, Bruna Abdullah is in a relationship with a foreign guy, who is known as AL. They both are in relationship for many years, says a source.

The interesting part is that, while Bruna Abdullah and her Boyfriend AL are in a pleasant walking in the Switzerland grass field, her guy AL suddenly proposed her openly and offered the ring. 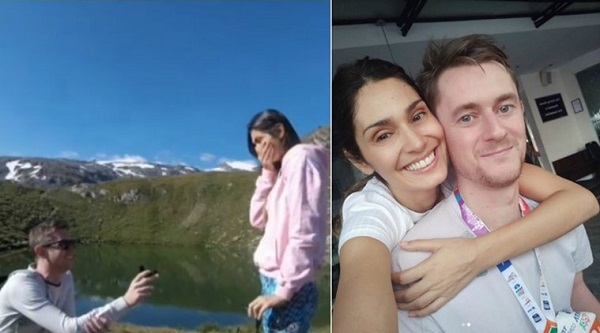 Surprised and delighted Bruna busted out in tears and accepted the ring and offered a Kiss.

The scene was captured live and posted in the Instagram.

When asked about this sweet moment to Bruna, she said the following:

“I’m marrying the man of my dreams! He treats me like a princess and I feel like the luckiest girl in the world! Thank you so much from both of us! The surprise was so beautiful I had to share!”