Nayanthara (Age 34) is a Successful and leading South Indian Tamil Actress, majorly seen in Tamil movies. Nayanthara’s was born on 18 November 1984 in Bengaluru, Karnataka, India, and her birth name is Diana Mariam Kuriyan.

She is also a leading Heroin in other south Indian language movies like Telugu, Malayalam and Kannada. Also, she is a prestigious Kalaimamani award winner. 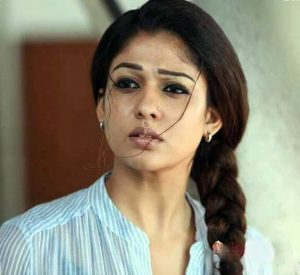 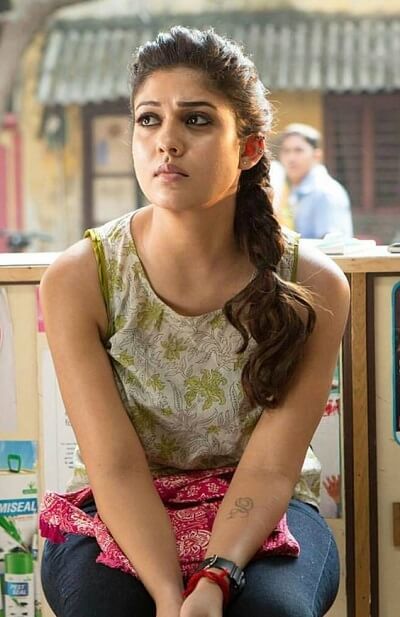 She was born in a Malayali Jacobite Syrian Orthodox Christian origin, and follows Christianity to the core.

Nayanthara’s family is a nuclear family. Her father’s name is Kurian Kodiyattu, who works for Indian Air Force and her mother’s name is Omana Kurian. 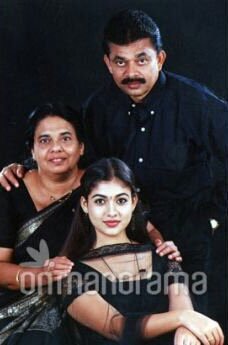 Nayanthara has an elder brother called Leno, who lives in Dubai, where she often visits.

Nayanthara studied all over in India, since her father was associated with the Indian Air Force. She mostly did her schooling in the northern part of Indian like Jamnagar, Gujarat and Delhi.

But she has been in Balikamadom Girls Higher Secondary School, while she was in Tiruvalla, Kerala.

After her schooling in Kerala, Nayanthara joined Marthoma College, Thiruvalla for perusing her B.A. (English Literature) 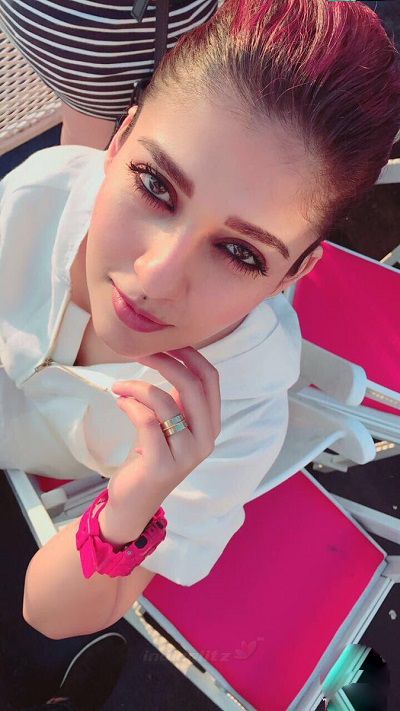 During her college days, Nayanthara was doing modelling as a part time work and by seeing her one of the project, Sathyan Anthikkad approached Nayanthara for a significant role in the movie Manassinakkare (2003), opposite Jayaram.

But, Nayanthara did not show interest about the offer she received initially, however, later accepted to do the role. 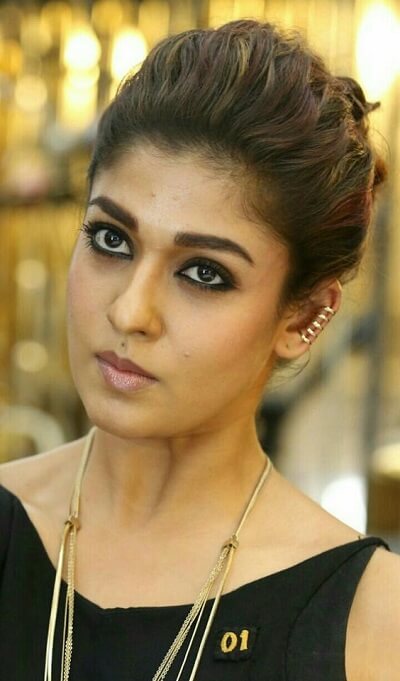 Nayanthara is basically born in an orthodox Syrian Christian, however converted to Hinduism at Arya Samaj Temple in Chennai during 2014.

The actress also undergone the holy process called Shuddhi Karma – a process in Vedic purification conducted in front of the Homam.

She also chanted the hymns of the Veda and Gayatri Mantra under the guidance of the priest during the Homam.

After the completion of the process, she was given with the official certificate for the conversion to Hinduism, and her stage name became her official name.

The actress also further mentioned that, she read Ramayana and become curious about her role Sita for the movie Sri Rama Rajyam. 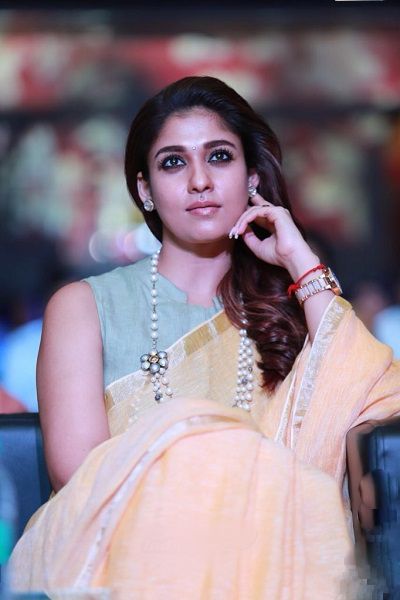 Nayanthara also gave up Non-Veg foods during the shoot of Sri Rama Rajyam.

She also visited the sacred Hindu places like Haridwar and Rishikesh in May 2014.

Nayanthara’s marriage plan is one of the most important aspect, which the fans are expecting about.

She was in a relationship with the Tamil actor Simbu and did Vallavan together in 2006. A huge banner of both on the mount road of Chennai (Vallavan movie promotional poster), showing Simbu nibbling Nayanthara’s lips attracted public attention to the maximum.

During this issue, Nayanthara was noted for the tattoo on her forearm, printed with Parabhu Deva’s name. 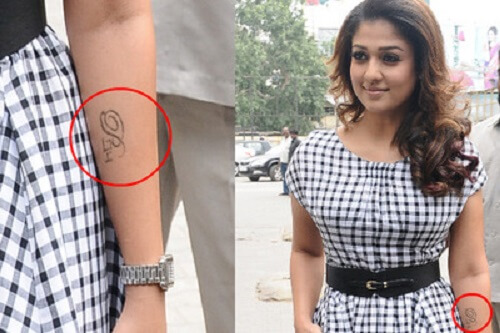 The relationship between them become weak, as Prabhu Deva’s wife Latha filed a police case against the couple for living together. 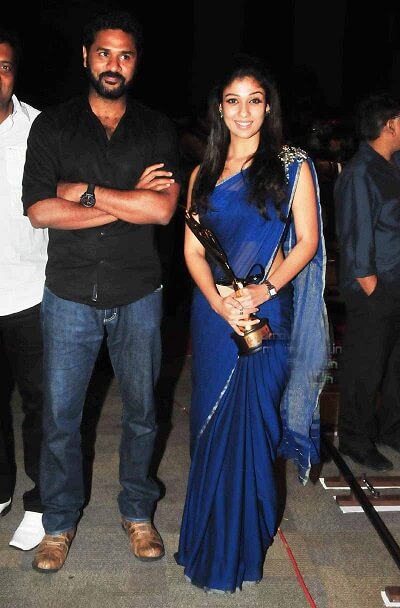 Latha further said that, she will go on for the hungry strike, if the reunion with Prabhu Deva is denied.

Various women’s organizations supported Latha in this issue against Nayanthara.

At present, she is in relationship with the film director Vignesh Shivan, with whom she worked for the dark comedy movie Naanum Rowdy Dhaan. 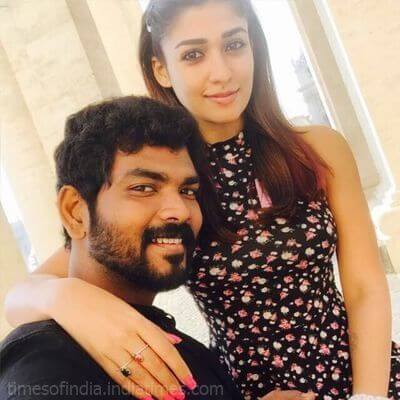 The relationship between Nayantha and Vignesh Sivan was officially confirmed when they walked in together during the awards show in Singapore.

After the box office hit of Manassinakkare (2003), Nayanthara played two more movies in the year 2004. Both, Natturajavu by Shaji Kailas, and Vismayathumbathu by Fazil gained critical acclaim for Nayanthara’s acting performance.

After a good start in Malayalam movies, Nayanthara started her career in Tamil movies in 2005. She first made her debut in Ayya opposite Sarathkumar, directed by Hari. 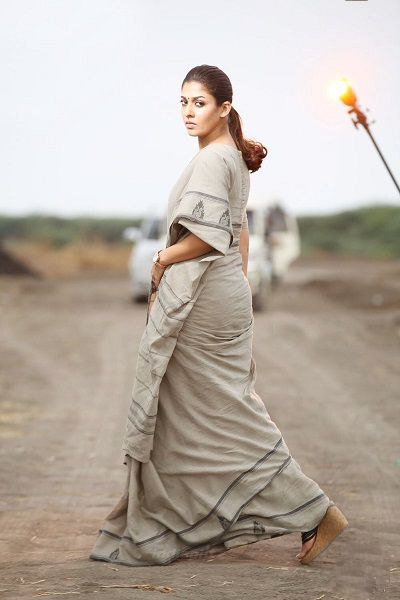 Nayanthara portrayed a cute and chubby school going girl in the movie Ayya.

Comments about her Tamil Debut:

Nowrunning.com noted that, – “presence with her beautiful smile is crowd winning” 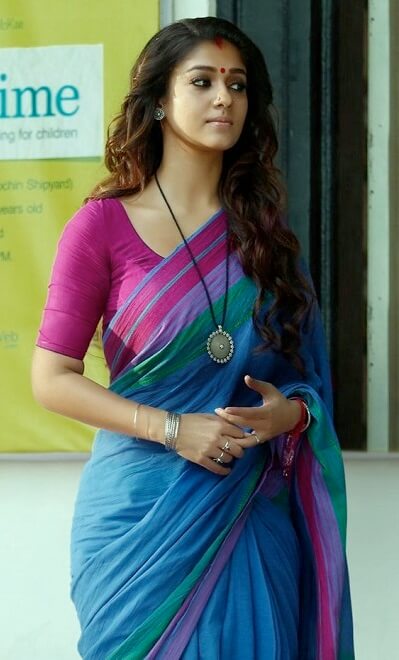 Nayanthara was actually chosen by director P. Vasu’s wife, that she was impressed with the performance of Nayanthara in the movie Manassinakkare.

By the time she accepted the movie Chandramukhi, Nayanthara was under the shooting of her Tamil debut movie, Ayya (2005).

Later the year, Nayanthara got into another huge Box office hit movie Ghajini, directed by A R Murugadoss. She played a second heroin role, appearing as a medical college student, who actually explores the diary of Sanjay Ramasamy (Actor Surya)

In 2006, Nayanthara joined S. J. Surya for the movie Kalvanin Kadhali and gained appreciation for the role. In the same year she came up with three more movies:

The movie Vallavan, Opposite Simbu was one of the movie created a big hype for Nayanthara. She portrayed the character of a college lecturer who falls in love with the student (Simbu), who is younger than her. 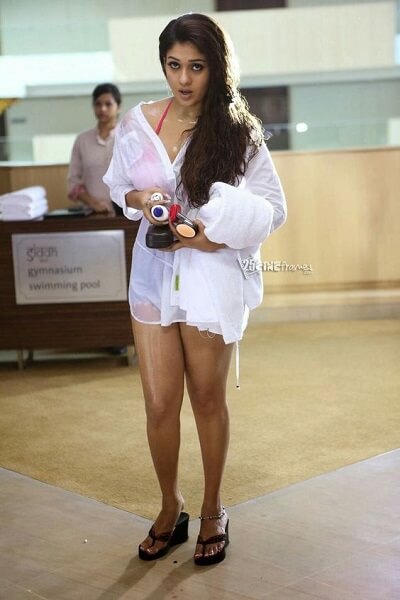 Sify.com stated that, “Nayanthara virtually walks away with the film and has never looked so beautiful. She looks gorgeous, especially in songs and does justice to her well-etched out role”

Nayanthara played the character Meghala, a news reporter and the movie is based on the Honest journalist Dheeran (Sarath kumar).

The next big acclaim for Nayanthara in her career in 2006 is E, a science fiction movie. Nayanthara looked beautiful from this age as she lost weight for her movies. Rediff and Indiaglitz appreciated Nayanthara’s role in the movie portraying a bar dancer. 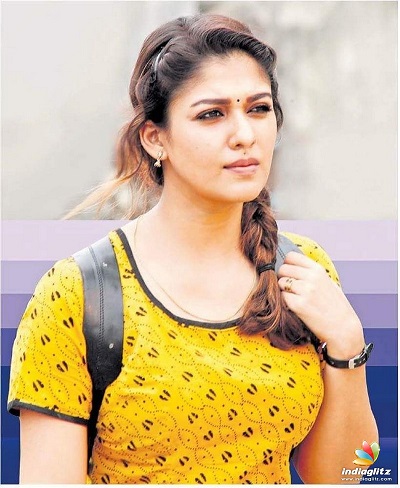 Nayanthara revealed her stylish and ferocious face action in the gangster movie Billa (2007) opposite Ajith, directed by Vishnuvardhan.

Nayanthara was a style-cat in this movie with all possible looks to make the audience go mad about her glamour.

She looked hot and alluring in her small skirts with tops and with tall boots. 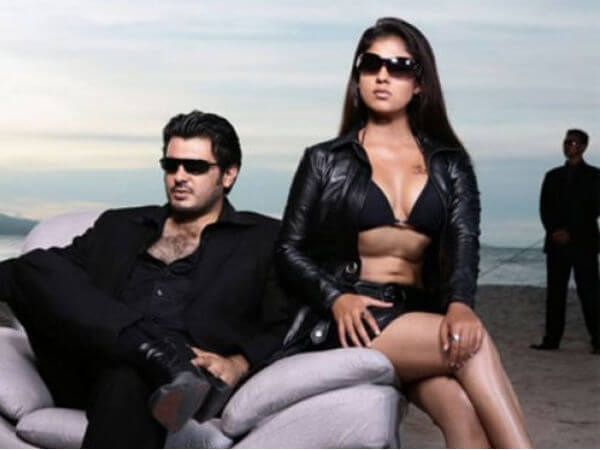 A reviewer from Sify.com mentioned Nayanthara as “show stopper” stated that, “Nayanthara has gone full throttle to look her sexiest best.

She has a beautiful body which she flaunts daringly and is also able to bring out the cold aloofness and bitterness of her character”. 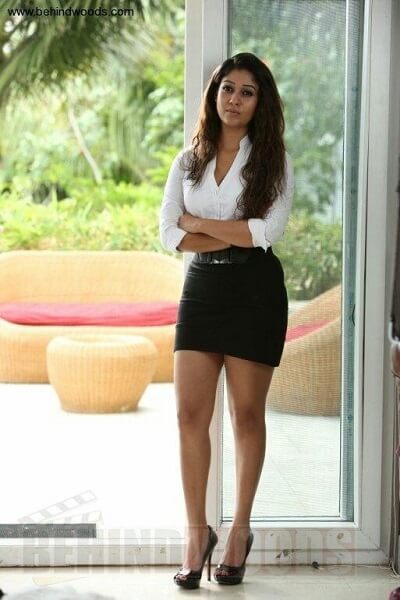 On the other hand, a reviewer from Nowrunning.com said that, Nayanthara looked “great in mini-skirts, jacket, dark glasses and tall boots”.

The next year in 2008, Nayanthara had stacks of five movies released in Tamil, in the same year- Yaaradi Nee Mohini, Kuselan, Satyam, Villu and Aegan.

Yaaradi Nee Mohini, a family-oriented subject and Nayanthara portrayed her role as a homely girl, while on the other hand as a modern corporate office employee.

“Nayan dispels her bombshell act and proves that she can more than just that. She breaks into tears when needed, shows vicious contempt when rubbed the wrong way in the name of love, and looks endearing in songs” 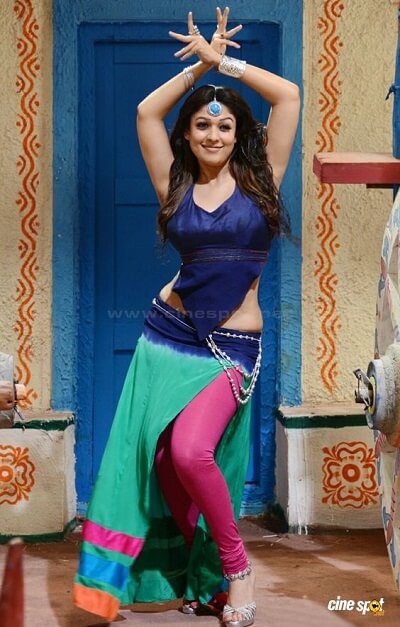 Kuselan (Co-starred Rajnikanth, Meena), Satyam (opposite Vishal), Villu (opposite Vijay) and Aegan (opposite Ajith) are some of the other Tamil film of the same year, of which none of the movie ran successfully like Yaaradi Nee Mohini.

Nayanthara acted in four south Indian languages, of which all the movies turned out to be a box office hit in 2012.

The mythological movie Sri Rama Rajyam (2011), directed by Bapu is a milestone for Nayanthara’s profession. The Sita role played by her received a critical acclaim for the performance.

Rediff.com mentioned her performance as follows: 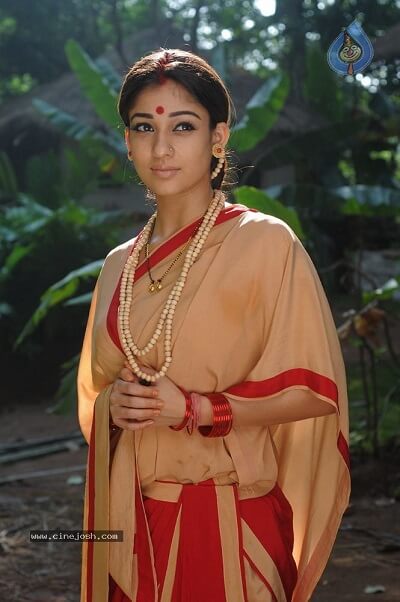 After taking a small gap of eleven months, Nayanthara came back for the shooting of the movie Vande Jagadgurum (2012). She portrayed the role of a journalist, opposite Rana. 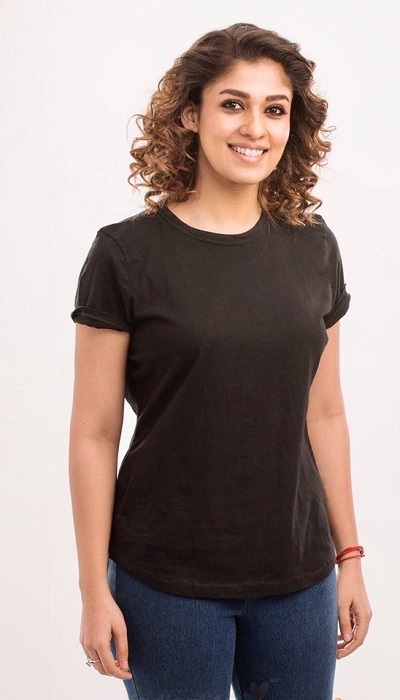 Raja Rani (2013), a sweet love story from Atlee’s direction gained Nayanthara a significant comeback in the field of Kollywood.

Nayanthara played the role Regina, who got betrayed by her boyfriend (Jai), but, gets married to her husband (Arya), just because for the sake of her Father (Sathya raj).

About the Character Regina, Sify.com noted that:

Nayanthara won both, Filmfare and Vijay Award for Best Actress for playing the lead role in the movie Raja Rani (2013). 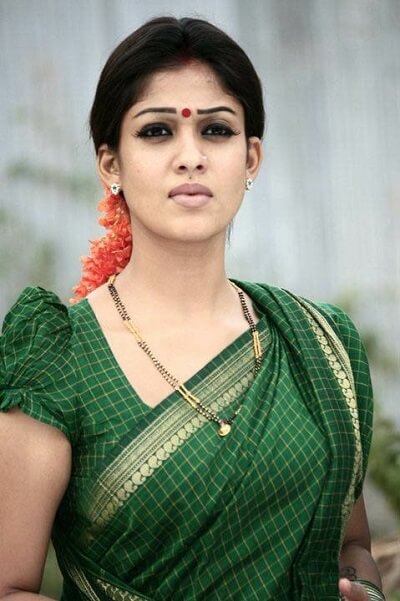 Her next project in 2013 is Arrambam, directed by Vishnuvardhan, opposite Ajith Kumar. She played a lead role in the movie helping Ajith to conquer a group of corrupted people betrayed and being a reason for his friend’s death.

The movie movie Arrambam (2013) was listed in one of the top grossing Tamil movies for the year 2013.

After Anushka Shetty, Nayanthara also gained heroin-based roles. Anaamika (2014), a remake of Kahaani (2012) by Sekhar Kammula cast Nayanthara in the role of IT professionals, who migrates to Hyderabad in search of her missing Spouse.

The film gained her huge applause and appraisal about her performance in the movie.

The next female lead role played by Her was Maya (2015), a horror movie. Nayanthara played the role of a single mother, whose past life was in the dark.

The movie spotlighted the role of Nayanthara and her significant acting sides, which was kept hidden. 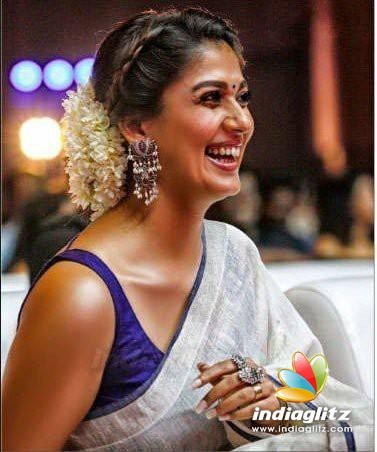 As the career growth continued steadily, she started exhibiting her talent in various aspects like action and comedy. Some of the best movies of 2015 are Bhaskar the Rascal, Thani Oruvan and Naanum Rowdy Dhaan.

Nayanthara portrayed a cute, innocent and quiet girl character, who is in the pursuit of taking revenge on the villain. 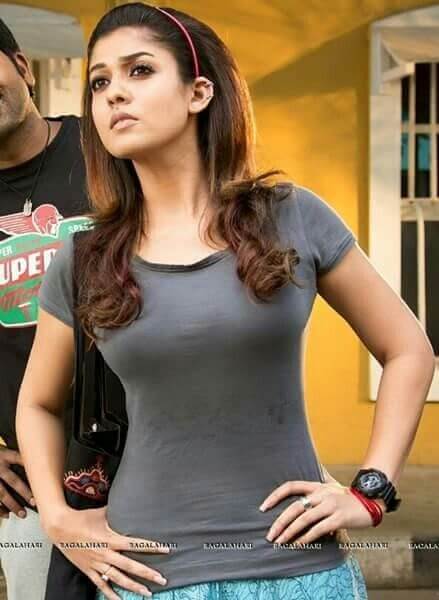 The movie is a dark comedy-based subject and she won the second Filmfare Award for her role in Naanum Rowdy Dhaan, directed by Vignesh Shivan.

About the performance in the movie Naanum Rowdy Dhaan, a reviewer from Sify.com uttered the following quote:

“Nayanthara’s Kadambarai is a well-etched out role, the actress is effortlessly charming and she does full justice”, and “infuses the part with the right portions of vulnerability, restraint, and quiet strength, delivering a performance that is nothing short of perfect”

Some of her best movies of 2016 are as follows:

Puthiya Niyamam (2016), opposite Mammooty and Nayanthara, played the role of a rape victim. Her role Vasuki Iyer is also dubbed by her own voice, that she got appreciated by the mainstream media. 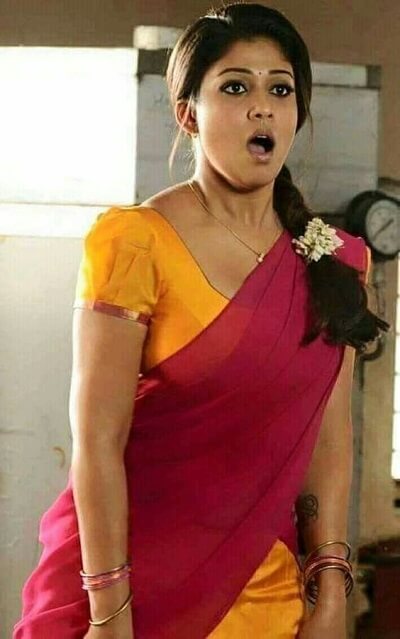 Upcoming next in 2017 is the Dora, a horror subject and Aramm, a public problem revealed story. She appeared in the role of a District Collector in saving the child fallen inside the bore well tunnel. There are many such cases recorded all over in Indian, and the movie is based on the case studies. 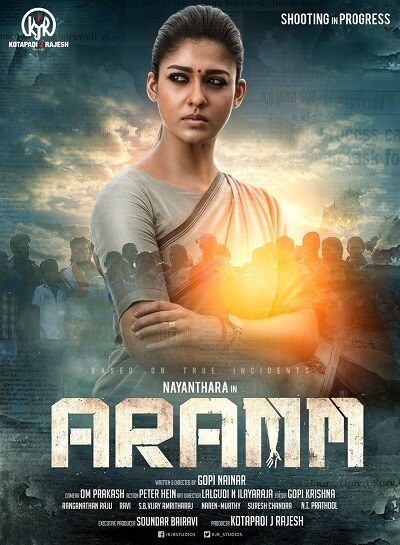 Nayanthara acted in the role of the District collector, which gained her again huge fame.

Another commercial movie hit that gained Nayanthara again a milestone is the movie Velaikkaran, co-starred by SivaKarthikeyan. The story of the movie revolves around the extortion and the corruption taking place in the food and commercial industries. 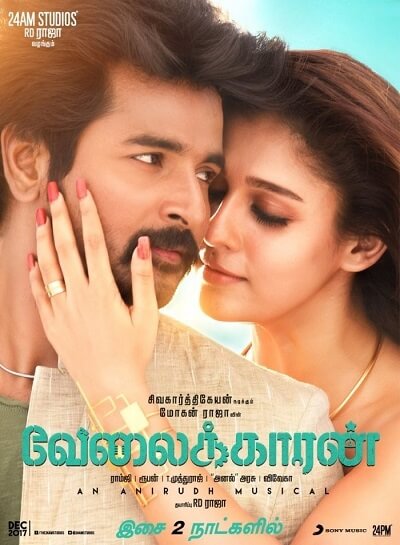 Nayanthara acted in the role of Mrinalini, a social interested girl who is helping and supporting Sivakarthikeyan.

Showing the mobile torch to protest the bad corporate and to support the consumers is a noted scene in the movie. The movie was a huge commercial hit and did well in the box office hit.

The most expected movie in Tamil from Nayanthara is Bigil, co-starred by the lead Tamil actor Vijaya. The movie is directed by Atlee and produced by AGS entertainment. Nayanthara takes up the lead role in the movie and the film is based on the sports action film and expected to release for the Deepavali festival 2019.