Vidyullekha Raman (age 26) is a Tamil actress mainly appears in Tamil and Telugu films featuring as a Comedienne. She was born on 4 November 1991 (DOB) in Chennai, Tamil Nadu in an orthodox Hinduism family, and she is better known as Vidyu Raman.

She has worked for more than a decade and got recognition as a Comedienne in Tamil Movies. Some of her performances are seen in Veeram (2014), Inimey Ippadithaan (2015), Puli (2015) and Vasuvum Saravananum Onna Padichavanga (2015).

Vidyullekha Raman’s father Mohan Raman is a senior actor in Tamil movies and Television serials, who is actually a mentor for Vidyu Raman.

She made her debut in the Tamil movie through Vinnaythandi Varruvaiya (2010), directed by Gautham Menon, co-starred Simbhu and Trisha. 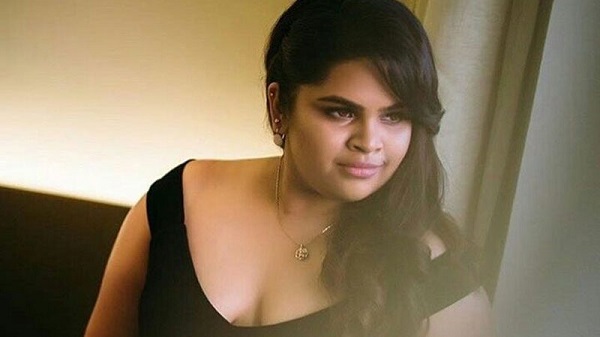 Things you may not know about Vidyullekha Raman

Vidyullekha once become irritated about her cell phone network provider (Airtel) for not responding through their customer support. Fed-up Vidyu, tweeted about this issue in her page mentioning that, she is going to port all her Airtel numbers to some other mobile network.

Vidyullekha created a vibration through her campaign Sexy or comedian can be in any shape. She came up with a photoshoot wearing a sexy black dress with almost no jewels and features like a Hot and Sexy model.

Vidyullekha has a sentiment in her career, that she will get her shooting date book signed by the Superstar Rajnikanth every year.

A couple of years ago, Vidyullekha Raman visited Vienna with her friends for enjoying her holidays. While returning to India, she lost her passport and money from the hotel lobby.

She further tweeted that, “So I was not allowed to see the CCTV footage in the five-star hotel but the Austrian police saw it. A man who entered distracted me for a second. He asked me how to get to an address and by the time I said I don’t know. His friend came from behind and took it. Shocked. Hope embassy helps.”

Vidyullekha Raman started gaining interest towards stage performance and theatre activities while she was in her school days.

Later she went on to M.CT.M. Chidambaram Chettyar International School Mylapore, Chennai for her higher studies.

She did her graduation in Visual Communication at M.O.P. Vaishnav College, Chennai and become well known for her stage production.

Due to her cute and chubby appearance, she gained popularity quickly in her career, which also helped her a lot in getting chances.

Vidyullekha Raman made her foray into Tamil and Telugu movie through Neethaane En Ponvasantham (2012) and Yeto Vellipoyindhi Manasu (2012), respectively. She portrayed the friend character Jenny for the main role played by Samantha as Nithya.

In 2013, Theeya Velai Seiyyanum Kumaru, directed by Sundar. C gained her a special view about her comedy performance. She also did a major role in Inimey Ippadithaan (2015), opposite Santhanam.